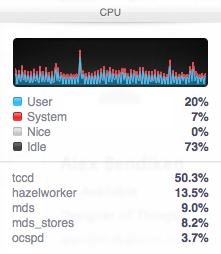 Periodically—and frequently—a process called, “tccd”, would momentarily ramp up its CPU usage to around 50%. At the same time, the process’s memory would grow and grow. When I checked this morning, it had grown to 1.3GB.

In this post on the Apple Support Communities forum, a user reports high memory usage of the tccd process, but there are no solutions proposed.

In another post someone mentions that the tccd process manages which applications have access to your contacts. That appears to be correct—after I deleted the TCC.db database, the OS started popping up lots of dialogs asking permission if this app or another could have access to my contacts.

But resetting the TCC.db database unfortunately didn’t solve my problem with the tccd process using lots of CPU and memory.

Watching the Activity Monitor for a while, I noticed that Hazel’s “hazelworker” process sometimes ramped up around the same time as the tccd process—you can see this in the screenshot above, in fact—so I started poking around there.

What I found is that several of my Hazel rules involved moving files to a folder which no longer existed (I had moved it a few days ago). After fixing those rules, to my amazement, the problem with the tccd process completely disappeared.

So, somehow, the root of my tccd problem was the existence of broken Hazel rules.