Seeing so many fragmented discussions about how and when we move on from COVID-19, I wanted to try to capture the considerations in a single, coherent note.

The vaccine and its timeline

Let’s start with the vaccine. Once a vaccine is available, then this crisis is mostly over and the world can return to normal, as getting vaccinated will (for most people) immunize them against getting sick from infection.

From the time of this writing (April 2020), we’re looking at 12 to 18 months before a vaccine will be available. Why so long? Because you can’t inject billions of people with something that isn’t very, very, very well tested.

Since closing the global economy for 12 to 18 months would be a financial and humanitarian catastrophe, a lot of energy is being spent thinking about how we can “open up” earlier. But this is far more challenging than many realize.

If everyone in the world could get infected, most would live, and we’d find ourselves in a state in which the large majority of people have immunity through COVID-19 antibodies. This is often referred to as herd immunity.

So why don’t we just let the virus run its natural course, and reach herd immunity as fast as possible? For two reasons:

For those who develop life-threatening COVID-19 complications, hospitalization, and in particular, access to an Intensive Care Unit (ICU), is their only hope of survival.

As it happens, there aren’t many ICU units in the world. As a consequence, a relatively small outbreak can immediately overwhelm the local hospital system. If on average there’s one ICU per 10,000 people, and a COVID-19 outbreak quickly results in 1% requiring an ICU, that’s one ICU available for every 1,000 who need one.

And when that happens, the consequences can be terrible, as we saw in Italy and Spain, where at one point, people over the age of 65 arriving to hospitals were simply sent home to die, as there was nowhere to treat them. Under such circumstances, the natural mortality rate of COVID-19, which appears to be roughly 1%, can increase to 10% and more, because so many die due to lack of hospital access.

And that brings us to possibly the most misunderstood aspect of this crisis:

The main problem with COVID-19 is not the individual risk of death. Rather, it’s that the virus’s contagiousness leads to outbreaks that immediately overwhelm local hospital systems, and that, in turn, results in a spike in deaths.

How do you prevent outbreaks? Simple. You prevent humans from coming in contact with each other, which is what countries are doing through mandated lockdowns. Here in Spain, it’s illegal to leave your home except for necessary trips to the grocery store, pharmacy, doctor, etc.

When lockdowns are in place, people stop coming in contact with each other, and you soon start to see the “flattening of the curve”: 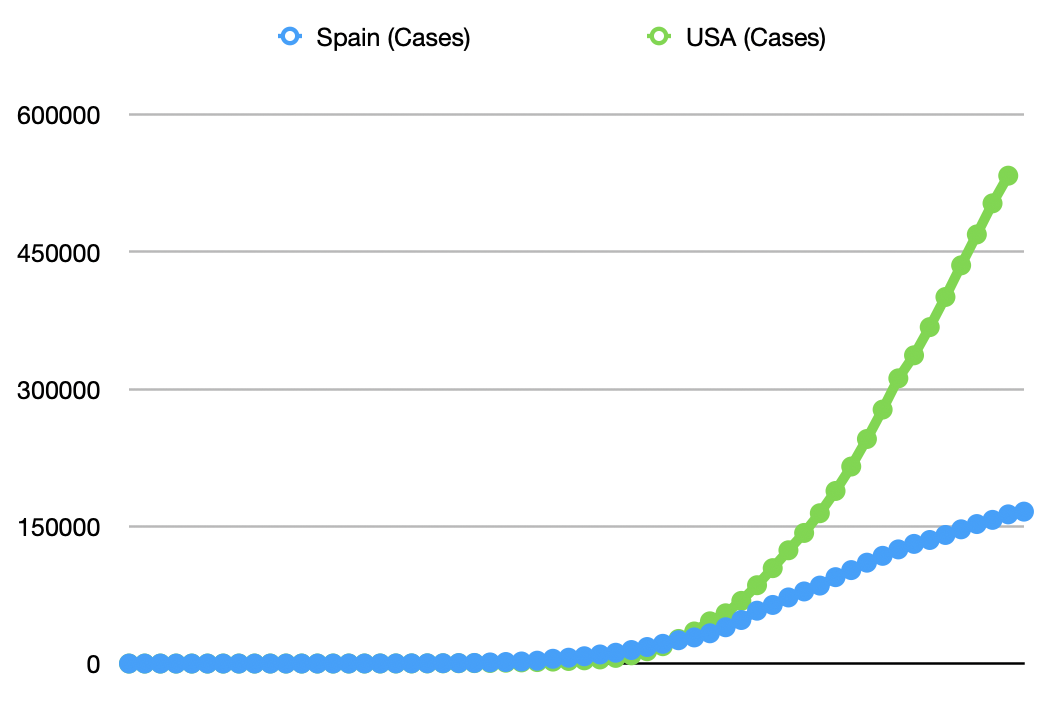 The approach in the United States began mostly as an appeal for voluntary “social distancing”, which helps. However, in a voluntary system, not everyone will follow it. In fact, many—especially the young—don’t even understand the need to, as they perceive the problem to be one of individual mortality, which is a low risk for them.

And so we get situations like Albany, Georgia, where a group of people who likely didn’t really understand the risk, or perhaps believed that COVID-19 wasn’t present in their community, gathered for a funeral, which prompted a local outbreak, and immediate overwhelming of the local hospital system.

The problem with opening up

Donald Trump often speaks about wanting to open up, as soon possible, even if on a limited basis. This sentiment is echoed by politicians in other countries. Just today, as the curve is flattening in Spain, the scope of people allowed to return to work was increased.

So what’s the problem?

We are nowhere close to reaching herd immunity, and so new outbreaks will occur. And it only takes a very small outbreak to overwhelm the hospital system.

At present, there are 560,000 cases in the US. Since testing has been limited, let’s assume the total infected and/or recovered is 10 times higher, or 5.6M. With a population of 350M, that would represent less than 2% of the country’s population having been infected today. As such, the United States, like nearly all countries, is nowhere close to herd immunity.

So as soon as the United States, or any country in a similar situation, “opens up”, there will be people who mistake individual-mortality as the core risk, or are otherwise uninformed, will gather with other people, new outbreaks will occur, requiring new lockdowns, to flatten the new curve. This will happen over, and over.

This has already been observed in countries like Japan and Singapore.

In the short-term, there’s little that can be done. We can watch each day as Donald Trump speaks of opening up soon, followed by Dr. Fauci trying to reign in false hope.

In the medium term, the solution seems to be a process called test, isolate, trace. Let’s call it TIT.

In a TIT process, the general population would be broadly, randomly and frequently tested, in order to try to find the real danger—those who are infected and contagious, but are asymptomatic. These are ones that cause outbreaks.

Such testing would obviously require a cheap and fast testing technology. When available, one could imagine traffic stops, voluntary drive-ins, random stops in malls, etc. Testing would be happening everywhere.

When an infected person is discovered, they would immediately be transported to an isolation center, where they would be kept until testing negative. Here in Spain, the federal government has been asking counties to identify hotels, convention centers and similar venues where infected people could be placed in such a TIT process.

When an infected person is discovered, an attempt would then be made to identify everyone they’ve been in contact with, and then those people would be located, tested, and for the positives, the process would start again.

It’s believed that a TIT process—combined with societal behavioral changes including social distancing, wearing masks and frequent hand-washing—would allow life to return to something resembling normalcy prior to the availability of a vaccine.

How do we implement TIT quickly? First, we need fast and cheap test kits to be available. Second, we need governments to organize and execute the process. Finally, we are likely to see achieving a TIT process tremendously accelerated through private technology initiatives.

Apple and Google have already announced a collaboration to develop mobile device based contract tracing technology, that preserves individual privacy.

There’s tremendous scope for technology to help. In addition to contact tracing, I would imagine that app-based tracking would also help in widespread testing, as it would be easier to identify those who have previously been infected, have antibodies, and can be skipped. At a certain point, random testing could be replaced with notifications of those requiring a test.

One final possibility to shortening the path to re-opening the world would be the discovery of one or more therapeutics that prove effective in the treatment of COVID-19. You’ve probably already heard mention of some leading candidates in the press—i.e. remdesivir and hydroxychloroquine.

Such therapeutics, if effective, wouldn’t provide the preventative protection of a vaccine, but would lower the effective mortality rate of infection in those places where the medicines are broadly available. For example, if something like hydroxychloroquine could improve the mortality by a factor of ten, then COVID-19 would become more akin to the common flu.

I’d like to conclude with a summary of what I believe are the key take-aways: