I’ve been an avid cyclist, cycling fan and Lance Armstrong fan, since, well, longer than I prefer to remember or state here. So you can bet that for a good portion of every July you’ll find me glued to the tele watching the Tour de France. (One of the benefits of living in Europe and being the company boss. 🙂 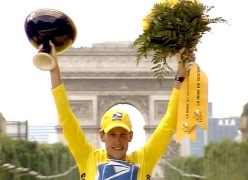 This year was a special Tour, as the American Lance Armstrong went for an amazing fifth consecutive win at the world’s largest and most important bicycle race, to join the mythic likes of Jacques Anquetil, Eddy Merckx, Bernard Hinault and Miguel Indurain as the only cyclist in history to win five Tours. When you couple this with the fact that Armstrong was near death just a few years ago suffering from cancer, his story just becomes truly epic.

Stage 1 saw a mass sprint crash that took out American up-and-comer, Levi Leipheimer with a broken tailbone, and resulted in a fractured collarbone for the American favorite Tyler Hamilton. (The crashed was caused by the same inexperienced Team Kelme rider that took out Mario Cipollini in this year’s Giro de Italia. They need to get that guy outta there!) Even Lance himself was caught in the crash (but fortunately not hurt).

Lance appeared far from his best during the stages in the Alps, when it was learned that he came into the Tour with a bit of stomach problems (and, later revealed, a bit of hip tendonitis.) He was attacked left and right by the likes of Iban Mayo and (the surprisingly strong) rival Joseba Beloki. Tracking Beloki seem to be the best Lance could manage. Just seeing his face during the climbs, one could tell he wasn’t the same as in past years.

Then things really got bad when Armstrong, whose dominance has always been in the Individual Time Trail, lost over a minute and a half to the German powerhouse Jan Ullrich! During the stage, Armstrong lost over 6 kg (10 lbs!) due to a mysterious case of dehydration. (Later Armstrong revealed that he himself thought his tour was over at this point.)

The following stages in the Pyrenees mountains saw Armstrong struggling to just keep up with his rivals, while his body slowly recuperated from the dehydration. Smelling blood, his key rivals such as Ullrich and the Russian Vinokourov tried their best to drop the American.

Bad luck came to Joseba Beloki, trying to break a string of second-place Tour finishes, descending a mountain with Lance on his wheel. He entered a hairpin turn too fast, and locked the back wheel. Trying to compensate by braking on the front, he tossed himself over the handlebars and cracked his hip and arm in the fall. His race was over. Armstrong showed the abilities of a champion, when Beloki’s fall left nowhere to go except into a field! Reacting in an instant, Armstrong used his mountain biking skills to navigate the farmland stretch to rejoin the race course about 50 meters below. It was amazing! (The race judges agreed not to penalize him for cutting the course short. 😉

The key stage for Armstrong came during the next-to-last mountain stage, at Luz Ardiden. This mountain-top finish was the make or break section of the race for Armstrong. With only a 15 second lead over Ullrich, he needed to gain serious time on the German if he was to have any chance to win after the final individual time trial. Ullrich made a tactical mistake attacking Armstrong on the day’s penultimate climb, and gave the American the confidence he needed to launch a major attack on the final climb.

But then disaster struck!

Some fan on the side of the road, just a bit too close to the action, hooked Armstrong’s handlebars with his souvenir bag, and brought Lance crashing to the ground. Iban Mayo crashed on top of Lance, slightly cracking his (Armstrong’s) Trek bicycle frame. Both riders got up and took off… Then as Lance tried to change gear, the rear derailleur stuck (from misalignment due to the cracked bicycle frame). Lance’s foot popped out of the pedal (from force!) and he darn near crashed again!

But then one of the highlights of the entire Tour came, as Jan Ullrich and Tyler Hamilton displayed examples of true sportsmanship by waiting for Armstrong to rejoin the group. (It’s an unwritten gentleman’s rule that the racing stops when the leader crashes, until it’s determined whether he’s continue or not.)

The surge of adrenaline from his crash boosted a desperate Armstrong to launch his second, key attack on the Luz Ardiden. Ullrich couldn’t follow. Mayo tried, and failed. Lance was off once again on his way to a stage win, and another spectacular display of superiority that we were used to seeing in past years, and by the top, taking a full minute out of Ullrich. More than the gained time was the regained confidence, and possibly the blow to Ullrich’s.

And so it would all come down to the final time trail. A show-down between Lance and Jan for the rights to the Yellow Jersey the following day in Paris. Who would win? Lance lost 1:36 to Jan in the first time trial. But Lance was dehydrated. Lance was down. Now Lance was back in form, and the German knew it.

The next days leading up to the final time trail produced one of the greatest individual stage finishes in the Tour’s history. Tyler Hamilton, riding with a cracked collarbone and having suffered more than anyone could imagine during the tour, attacked on the last mountain stage, and rode over 100 km in isolation, holding off the charging pelaton, to single-handedly win the biggest stage victory of his life. It was really something to see. To do that under normal conditions would be something, but to do it with a cracked collarbone was simply incredible. Allez Tyler! The Man from Marblehead (or as my friend Niall says, “The Man with a Marble Head”!)

Well, the day of the final time trial arrived. Ullrich need to beat Lance by one minute and five seconds to win the Tour. Difficult, yes, but not impossible for the German known to end his Tours with increasing strength.

Rain and wind made for some of the most treacherous racing conditions ever. Over 40 cyclist had crashed by the time Ullrich and Armstrong left the starting blocks. After the first time check, the two were within a second of each other. By the second time check, the situation hadn’t changed. Ullrich (knowing this) then began to take some risks. At first he gained time on Lance, up to five seconds (but far from the 65 he needed), but then crashed in stunning style in a round-about. He must have slid several meters before finally hitting the hay bells (face first!) Disoriented and possibly panicked, he jumped back on the bike and nearly crashed in the next turn. He went on to finish the stage, in fourth place on the day — even losing a few seconds to Armstrong.

For Lance, he knew that he’d won the Tour. Having heard of Ullrich’s crash in the helmet radio, he slowed down to reduce the risk of crashing, and finished the day’s stage in third place. Ullrich later explained that he took the risks to win the stage, as by the second time check he knew he wasn’t going to take enough time from Lance to win the Tour.

(As a side note, Armstrong averaged about 53 km/hour in that time trial. Yesterday I was descending a mountain on my bike at 50 km/hour, thinking how unbelievable it must be to have the strength to motor oneself on the flats at 53 km/hour!)

The following day’s stage to Paris saw Lance and the US Postal boys celebrating Lance’s victory in one of the most amazing Tours in recent history. For Lance, the win — which places his name on the pages of history in the Club of Five — was especially satisfying, having overcome everything he suffered in the race this year.

As a parting note, Lance has already announced he’ll be back next year gunning for a record-breaking sixth win. It’s kind of a pity that many Americans don’t realize what that would mean, or what it means to have won five Tours! Cycling, much less popular in the United States than throughout the rest of the world, is one of the most difficult and demanding sports that exists, and in this sport Lance Armstrong is (even more than) the Michael Jordan of our generation.

Great job Lance, you did it and good luck next year!

Tonight was the Brazilian Jiu-Jitsu (BJJ) championship in Malaga, Spain, in which three BJJ academies competed, Málaga, Marbella (where I train) and Granada. The good news (sorta), I finished second. The bad news, there were only three of us in my category (white belt, around 75 kg). Each fight lasted five minutes. A win was by either points, or submission.

In my first fight, I was a ball of nerves and lost on points. In the second, I got into my rhythm and submitted the opponent with a foot lock. The judges then indicated that foot locks are illegal in our category, but gave me the win anyway (since they hadn’t announced the rule beforehand.)

Finally, I had to fight the same guy again for the championship, and unfortunately lost by two points, thereby finishing second among the three of us.

With three cycling clubs in a small town like Marbella, you can imagine that its a fairly popular sport here. A friend of mine (Diego López Luque) and I even started a small website, MarbellaCycling.com dedicated to local scene. As you can see from the website, there’s a weekly calendar of rides.

Today, May 1st (a holiday here), was probably the hardest of the year –Peñas Blancas. This ride starts from Marbella and heads down the coast to Estepona. In Estepona, we turn right and began the monstrous 16km climb up to Peñas Blancas. When the professional tours come through this area (e.g. the Vuelta Espana), this is considered a “Category 1” climb, one of the hardest.

The first five kilometers of the climb are brutal, and that’s precisely where the attacks started. I’ve still got a long way to go in recovering my form from last year, so I didn’t even attempt to cover the attacks today. I arrived at the top in good condition, and was pleased not to have experienced any hip pain. (I think I’ve finally recovered.) Diego did very well, finishing 3rd. Palmi won the race (no big surprise), and Belga was extremely strong today, finishing 2nd.

This coming Sunday, it’s Estepona and then Istan, another climb, but not nearly as hard. 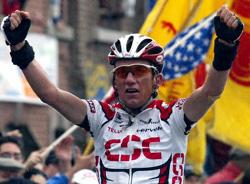