For the third year in a row, Lance won first place in his category, with a perfect nine wins in nine games, and Andrea finished third female in her category with 5.5 points of a possible 9.

Congratulations are in order to the Andalucia Chess Federation for once again organizing a great event, in a wonderful location. The hotel was great, the food was great, the weather was great, and of course it was fantastic to have a chance to see all our chess-playing friends from around Andalucia!

Next stop, the Spanish Kids Championship in July! 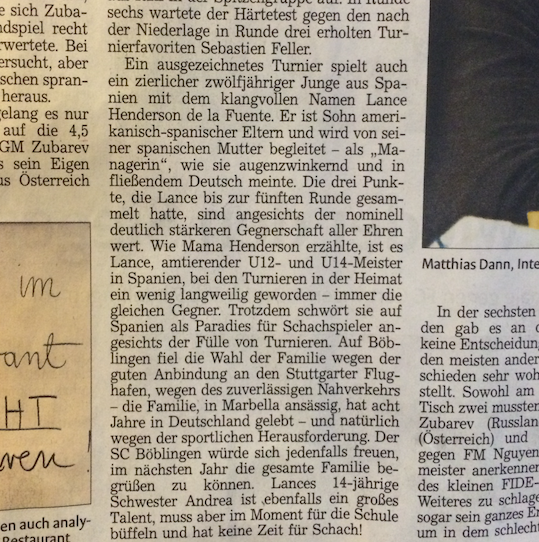 The 2015 World Youth Chess Championship (WYCC) took place between October 25 and November 5, in the Halkidiki region of Greece, at the beautiful Porto Carras resort. For our kids, Lance and Andrea, this would be the second world chess championship in which they would participate as representatives of Spain, with the first being in 2013 in the United Arab Emirates.

END_OF_DOCUMENT_TOKEN_TO_BE_REPLACED

After coming so close last week in the Under-12 category—finishing 2nd due to the thinnest of tie-break computations—Lance (pictured above in the middle) decided to stay an additional week, and play in a superior age category.

After 9 rounds of classical chess play against the big boys in Under-14, Lance finished alone in 1st place, with 8 of 9 points and was declared 2015 Spanish National Chess Champion!

The full results are online at Info64.