Trip to the Alpujarra — Pampaneira, Bubion and Capileira

Published by Matt Henderson on December 31, 2012

In December 2012, we took a weekend trip to the Alpujarra, discovering the wonderful places in Pampaneira, Bubion & Capilleira. Hope you enjoy the article. If you’re traveling there, you can download all the places described in this article in a Rego collection here.

The Alpujarra is the mountainous part of Granada on the south-east side of the same range containing the Sierra Nevada ski resort. The most popular valley in the Alpujarra is that which contains the three beautiful pueblos — Pampaneira, Bubion and Capileira.

Of the three, the highest is Capileira, and that’s where we’ve traditionally stayed when visiting the area. From Capileira there’s direct access by car to the Hoya del Portillo, the starting point for popular hikes in the area to places like the Veleta, Mulhacen or the Refugio de Poqueira.

For this trip we decided to stay down in Pampaneira, the lower of the three towns, in a new hotel called, Estrella de las Nieves. The hotel happens to be run by the same family that runs our favorite restaurant in the area, “Casa Julio” — so expectations where high! We were only able to book two nights, though, due to the place being full on the third — New Year’s Eve.

We arrived on Saturday and checked in. The hotel, conveniently located on the main road (so it’s possible to park just outside), is two years old but still feels brand new. It’s spacious, cozy, rustic and built to a fairly high standard. The rooms are large, and the beds are firm and comfortable.

Buffet breakfast is served at 9am. Strangely, we didn’t find any eggs or sausage, but rather a lot of cakes, puddings and sweets. Maybe that’s not surprising, though, given Casa Julio’s reputation for great desserts. So as far as breakfast goes, it was almost reminiscent of Italy!

One of the nice touches at the hotel was their willingness to make a real cafe con leche at breakfast. (Why is that surprising? Well, we normally stay at the “Cortijo los Llanos” in Capileira, another great hotel, but with the strange exception that at breakfast they charge extra if you want a real coffee made by the barrista.)

Estrella de las Nieves is definitely in the same class of quality accommodation as the Cortijo los Llanos, up in Capileira. In fact, the only complaint I had was that the wifi was only available in the common area next to the reception; it didn’t make it to our room.

On Saturday evening, we had dinner in Capileira at one of our favorites, La Pizzeria. I tried the beef stew and it was great. Even if it a bit late in the season, the owners of this rustic and cozy restaurant love to serve meals with a slice of baked pumpkin, followed by a slice of “pumpkin pudding” for dessert!

On Sunday morning we packed up the Jeep, drove up to Capileira and continued on the dirt road leading up to the Hoya del Portillo. We stopped about half-way and parked at the junction which leads down to the Cebadilla. This was the start of our hike.

The Cebadilla, located about 4.5km from the junction, is an old abandoned town built around the hydro facilities which generate electricity from the various water flows from high above in the mountains. Although it’s called a “town”, it’s quite small; supporting in its heyday only about 200 inhabitants.

Past the Cebadilla we started the hike up the valley towards the Refugio de Poqueira. In the past, we’ve always hiked to the refugio from the Hoya del Portillo, but in the future we’ll most definitely take this route instead — it’s absolutely beautiful!

The path starts with some steep zig-zags up the mountain, offering scenic views of the valley, and then levels off for a few kilometers before turning up again up to the refugio. From Cebadilla, it’s about 5km to the refugio. On this particular day, we turned back in the middle after having walked about 6.5km from the car.

The kids managed to stay entertained during the entire hike, as they explained to me in great detail, and for five hours, all the aspects of Plants vs Zombies. I now understand the role of the magnet tool, when the bucket-head zombie appears, and stuff like that.

The Abuela Ili chocolate factory, and dinner at Casa Julio

In the late afternoon, we explored Pampaneira, and discovered the Abuela Ili chocolate factory. At least 50 different homemade chocolates were on sample and the kids tried each and every one. Before leaving, we bought a block of dark chocolate with almonds.

Back at the hotel, with about two hours to kill before dinner, I remembered the previous night’s UFC event. Logging into UFC.tv, I watched the Joe Lauzon vs Jim Miller fight of the year, and watched Cain Velasquez absolutely dominate Junior Dos Santos for five rounds in the heavyweight championship.

For dinner, we walked down to Casa Julio. The typical thing to eat in the Alpujarra is a dish called “Plato Alpujarreño” — with potatoes, peppers and scrambled eggs, covered with local chorizo, morcilla and longaniza. This time, however, we wanted something “slightly” lighter, and opted for the house speciality “choto” (goat) cooked in a garlic sauce with home-made ham croquetas, all washed down with some local wine.

And even though it’s not Paleo, we couldn’t visit Casa Julio without tasting a portion of their home-made cheesecake served with rasberries.

Heading home on Monday morning, we stopped for coffee at the region’s largest city, Orgiva. Very disappointing. We found the town dirty, poorly cared for, and full of drunks.

In fact, instead of Orgiva, we had actually planned to have a coffee at the Camping de Orgiva, just outside town.

We love stopping at that campground for coffee, but it was closed for New Year’s Eve.

For those of you interested in gear, a wide range of temperatures — from freezing to about 15 degrees celcius — was comfortably navigated with only four upper-body, lightweight pieces: A Mountain Hardwear micro-down jacket, an Arc’teryx soft-shell jacket, a Mavic short-sleeve technical t-shirt, and a SportHG long-sleeve thermal base layer.

Finally, here’s some photos we took during the trip: 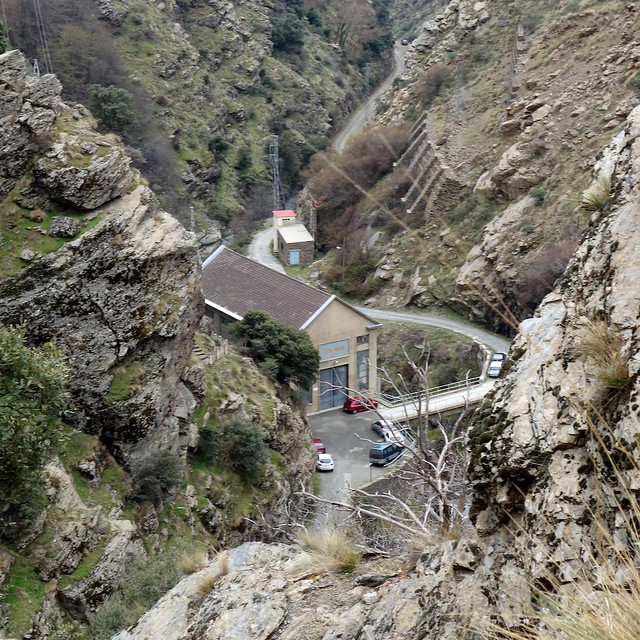