Published by Matt Henderson on October 30, 2014

In October this year, we spent 10 days in Batumi, Georgia participating in the 2014 European Youth Chess Championship. The thought of visiting a former Soviet country conjured up images of frozen gray buildings inhabited by equally lifeless, desolate people. The reality, however, was completely and positively different, reminding us once again that pre-conceived beliefs are no substitute for experience.

At the Istambul airport, I couldn’t resist the opportunity to try an authentic Turkish coffee. The taste was great—strong and intense—but, unfortunately, I think it was my last. Given that they don’t remove the grounds, it’s a bit like drinking mud.

All event participants traveled under the coordination of the event organizers, and so in Trabzon, Turkey we met up with the Spanish delegates, coaches and other participants to travel by arranged busses to Batumi. Our family, along with one other participant and his father, were assigned to a small minibus and were told we had to wait an hour for some final participants arriving on an 11:30pm flight. When that plane arrived, however, it had nobody on board, meaning the wait was for nothing. So at 11:30pm, we headed off for Batumi.

The minibus driver and his co-pilot were Turkish, and spoke no English. As soon as we left, they started playing music videos on a huge screen, each video seeming like something from a Eurovision contest. After a while, they both started smoking in the minibus. Toto, we’re no longer in Kansas!

The weather was absolutely awful, raining harder than I’ve experienced in a while. After about 2.5 hours of driving through the downpour, we arrived at the Georgian border. We were instructed to run through the rain to the passport processing building, while the minibus queued in a long train of 18-wheeler trucks to pass through vehicle processing.

Soaking wet, the Turkish authorities stamped our passports on the way out, and sent us off to the Georgian authorities for incoming processing. Looking across the way, we could see a couple of obviously poor Georgian families—with all their belongings, including the dog, wrapped in bedsheets—making their way into Turkey.

At Georgia customs, the officials were very friendly, stamping us without issue into the country, and issuing warm welcomes. After rushing out through the rain again, to where the minibus was waiting for us, we started the final 20 minute drive to Batumi, finally arriving at our final destination, the Radisson Blu hotel.

Originally, we were assigned to stay at the Intourist hotel in Batumi, but through a lucky last-minute reshuffling, we ended up being re-assigned to the far more luxurious Radisson Blu Hotel.

The staff at the Radisson were so friendly and helpful that I found myself consciously agreeing with their tagline, “The hotel designed to say, Yes”

This is the receptionist Sopho. Upon learning that our family was to be split across two rooms—one luxurious “superior” room on the 12th floor, and one normal room on the 6th—I asked if she could re-locate us all together. She said if we wanted to all be located on the 12th, it would cost an extra $250. When I asked, “How about letting us all stay together on the 12th, and not charging us anything extra?”, she thought for a moment, smiled, and said, “Sure, why not!”

And this is Keti, working at the bar. Each afternoon she would make the most delicious cappuccino for me, complete with delicious Georgian cookies, while I caught up on RSS feeds.

Butumi is situated on the black sea coast, in the south west corner of the country. Rising just above and behind the city are beautiful green mountains. Further in the distance, on a clear day, you can see the snowy outline of the Caucasus mountain range separating Georgia from its Russian and Azerbaijan neighbors.

The city itself seems to be characterized by the contrast between the old-and-run-down, and the modern-and-grandiose, as can be seen in this cityscape view from our 12th floor hotel room. The large building off in the distance is the Sheraton hotel, where the chess tournament was held.

Possibly typical of soviet-style (I’m not really sure), each building seemed to try to outdo the next in terms of design and features. This building next to our hotel, for example, was wrapped in an LED display, and featured, I kid you not, an embedded eight-car ferris wheel! 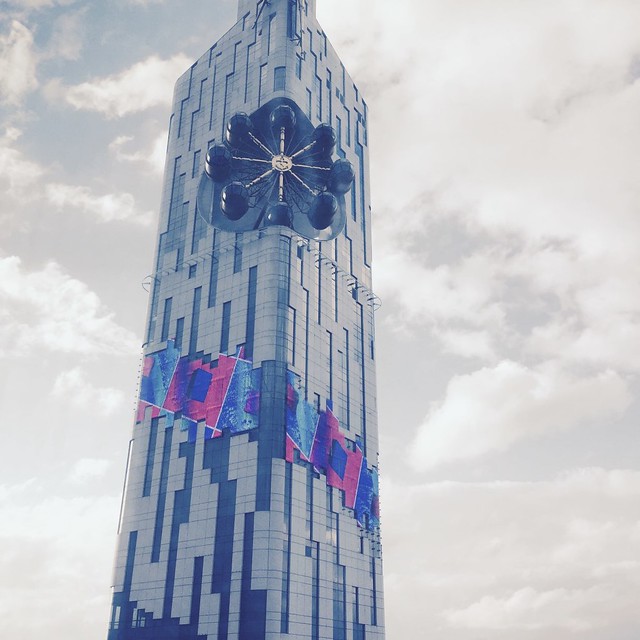 Although parts of the city were old and a bit run down, it was amazingly clean. The parks in particular were very well kept; we hardly saw a piece of trash anywhere, nor any graffiti. It also felt safe, with police on nearly every corner.

Our hotel was located just next to the seaside boardwalk, which was surprisingly nice; much better kept than the boardwalk back home in Marbella.

Next to the boardwalk was a large, permanently stationed ferris wheel that, unfortunately, we never found time to ride.

The boardwalk terminated into the Batumi port, where coal was frequently loaded and shipped off, and locals did their fishing.

Also next to the hotel, were the famous Batumi Dancing Fountains. Each night these fountains would come alive, with beautiful lights and literally dancing to the beat of various music ranging from classical to contemporary. 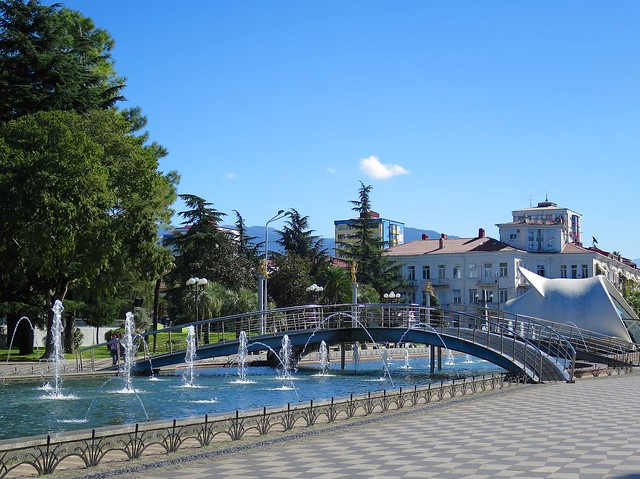 Something quite curious about the Dancing Fountains is that it’s an extremely popular place to have a wedding. In fact, we saw, on average, at least two weddings taking place there every single day!

While the kids were playing chess—each daily round could last anywhere from three to five hours—we’d often walk around discovering the sights and sounds—and tastes!—of the city. 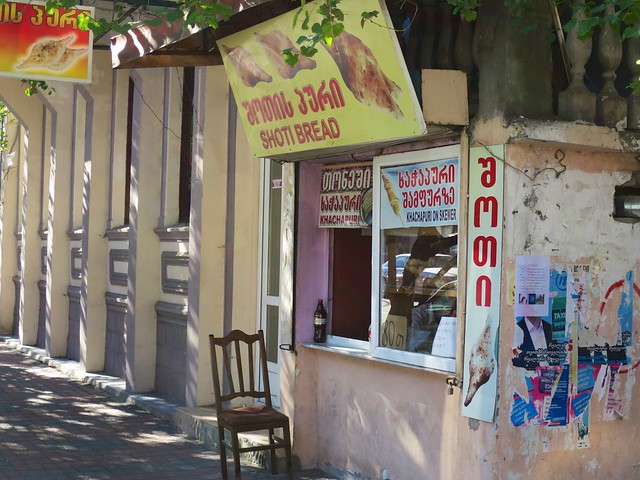 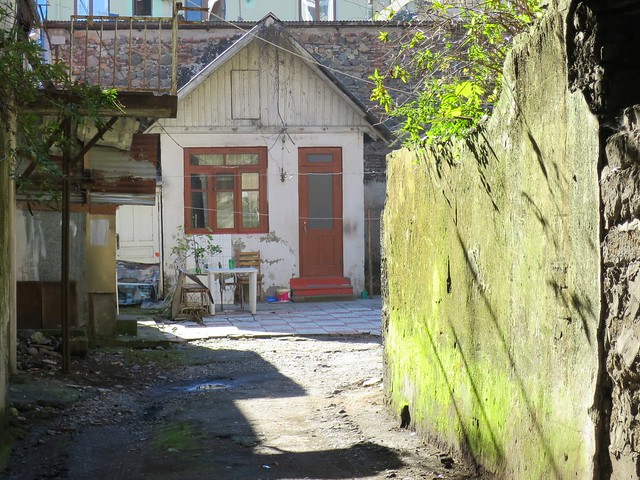 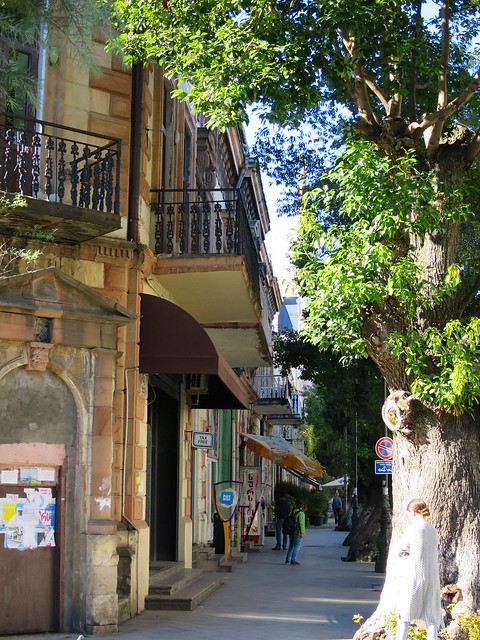 Spain sent 21 players to the 2014 European Youth Chess Championship—including our two kids, Lance and Andrea—to compete with kids from 45 other countries in categories under-10, under-12, under-14, under-16 and under-18 years old.

In addition to getting to play against Europe’s best, it was also a wonderful opportunity for our kids to re-connect with friends they only see once or twice per year. 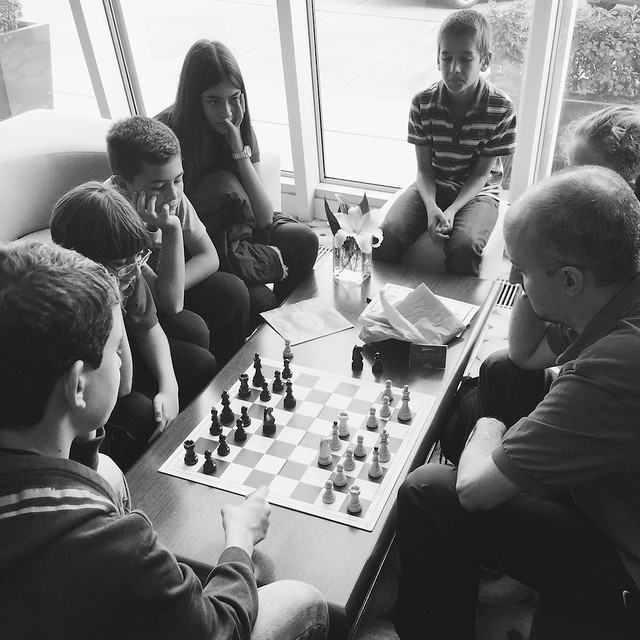 Most of the Spaniards would meet up for lunch each day, at a nearby restaurant called the “Pearl of the Sea”. (Given the switch from Intourist to Radisson hotel, only breakfast was served at the hotel, instead of full-board. For lunch and dinner, we were all assigned to eat at the Pearl of the Sea.

It was very soviet-style, with the same food served each day—cucumbers, tomatoes, two rice salad variations, potato salad and chicken. It was monotonous for sure, but after a few days we all got used to it! (Also, it seemed that every dish was loaded with dill, which I later learned is very typical of soviet dishes.) 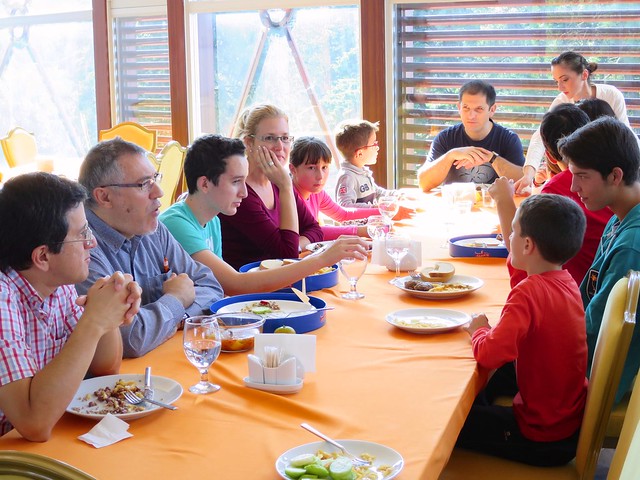 After a short post-lunch rest, we’d all head down to the Sheraton for the day’s round of chess, taking place in the hotel’s large (very large!) conference room.

Precisely at 3:00pm, with the kids seated at the tables, hands would be shaken, and the day’s chess round would commence.

After the round started, and the parents were asked to leave the playing hall, I’d usually make my over to the Cafe Gardens where the super-friendly—and very “Georgian”—Mari would recommend local dishes to try.

The dish pictured here is eggplant cooked with walnuts. It was absolutely delicious!

And this dish, served in a heavy cast-iron pot, is “Lobio”—white beans cooked with, again, walnuts. Lobio was tasty, but extremely spicy. I imagine it’s what the Georgian people eat in the winter, when they know a storm is coming and expect to be snowed in for a week.

After nine rounds of play—with many lasting as long as five hours!—Lance ended the tournament with 6 out of 9 points, finishing 18th overall out of 121 players in his first year in the sub-12 category. A great result! Andrea also had a good tournament, finishing 53rd out of 77 female players in the sub-14 girls category, with 4 points.

Spain’s only podium finisher was Jaime Santos, who finished 4th overall in the sub-18 category. The tournament, as usual, was dominated by the eastern European countries in which chess has a deep tradition, such as Russia, Georgia, Azerbaijan and Bulgaria.

Goodbye, Georgia. We’ll be back!

On Tuesday night, at 11:30pm, we said our goodbyes and boarded another minibus back to the Trabzon airport in Turkey. And then some 24 hours later, we were finally back at home.

We’re going to miss Batumi, and its warm and friendly people, and are already looking forward to going back in 2018, when the Chess Olympiad is schedule to be played there.