This is the story of how Goldmoney botched the communication of a fundamental change in policy, that ultimately may lead to me taking my business elsewhere.

Buying gold in the early days

As you know from reading my book, I’m a fan of the Harry Browne “Permanent Portfolio”, which promotes holding a quarter of your wealth in gold, and at least a part of which is held in physical gold.

Back in the day, there were two major online options for purchasing and storing physical gold—BullionVault and the original GoldMoney. Both were located in the United Kingdom, and each controlled over a billion dollars in gold for their respective customers.

While both services offered web-based access to their customers, they both felt old-fashioned and rigid. Neither company’s websites would win any kind of design award, although BullionVault’s was, in my opinion, thoughtfully useful. Both companies restricted incoming and outgoing funds to a single linked bank account. Account changes required phoning in. While GoldMoney allowed you to buy and sell directly with them, BullionVault implemented an “exchange” model, whereby you felt like a participant in a “marketplace”.

Both companies had similar revenue models—BullionVault charged commission on both buying and selling, while GoldMoney charged only on buys (though that commission was considerably higher). And both companies charged an annual fee to store your gold.

Later, a third player emerged, located in Canada, which caught my attention—BitGold.

BitGold’s stated mission was to build technology that allowed one’s gold savings to be used as a currency. Compared to BullionVault and GoldMoney, BitGold felt innovative and modern. You could buy gold with your credit card, or even Bitcoin. You could link multiple bank accounts. You could transfer gold instantly between members. You could even spend gold in the form of a gold-backed MasterCard.

Having hired the talented and motivated designer, Mike Busby, the BitGold website looked and behaved like the kind of high-quality website my own company strives to build for its customers.

And from a cost point of view, BitGold was uniquely attractive in offering no storage fees: 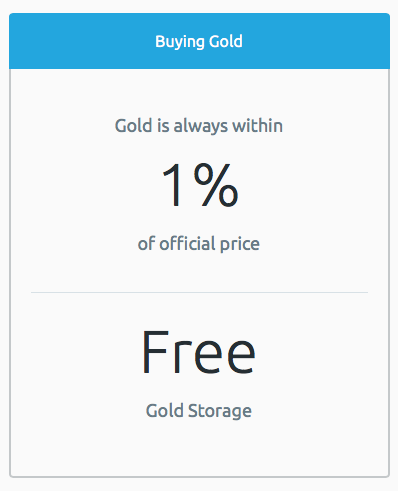 Now, as you know from my book, long-term investors are particularly sensitive to annual fees, due to their destructive compounding effects over time, and so the absence of storage fees was a highly attractive selling point for BitGold.

In terms of revenue models, given that BitGold themselves would certainly have storage fees, it was speculated that their business model hinged on earning surplus revenue through their technology-driven value-add services.

I didn’t initially open an account with BitGold, since they were still a new and unproven participant in the market, but that changed when the news emerged that BitGold had acquired GoldMoney, providing them with an considerable jump-start, and making them one of the world’s largest retail holders customer gold.

It was unclear at the time how existing GoldMoney accounts would be integrated into BitGold, but GoldMoney CEO James Turk’s statement certainly implied that the objective of the acquisition was integration:

We created GoldMoney with the vision of making gold accessible for savings and payments, a vision that BitGold is rapidly expanding in a new era of cloud computing and mobile technology. […] Users can expect a gold debit card, expanded payment options, as well as the many applications and features being developed by this innovative team.

One step towards this integration seemed to occur several months later when the company announced that BitGold was changing its name to “Goldmoney” (dropping the capital, “M”), and introducing three types of accounts.

My own account became a “Personal” Goldmoney account. A “Business” account was introduced for businesses. Finally, a “Wealth” account was introduced, that included storage fees, but benefitting from things like a special phone number to call for support, a dedicated “relationship manager”, the ability to hold money in several different currencies, and a couple of other features that I had no particular interest in.

It seemed the terms of my own, now “Personal”, account fortunately remained unaffected. Which was true for a while, anyway—bringing us to today, and to the point of this story.

Something has happened recently at Goldmoney, which has forced them to implement a major change in policy affecting Personal accounts:

This is a very big deal, for the following reasons:

This seems to change the basic Goldmoney service proposition to something sort of analogous to “checking” and “savings” accounts with a bank—i.e. you’re to hold your savings in a Wealth account, and any funds you want to use for low-fee transacting should be held in a balance-limited Personal account.

It would not be surprising to learn that BitGold/Goldmoney couldn’t manage to earn enough through their technology offerings to cover their own gold storage costs. Clearly, a company has to be profitable to be sustainable in the long-term and so even though it was good while it lasted, I can understand the need to apply storage costs.

What I dearly wish, though, is that Goldmoney had simply communicated the changes in a straightforward plain-English way, respectful of their customers ability to understand the reality of the situation.

Instead, this is the email I received today, which appears to spin the story as if the whole change is somehow “a great thing!”, and in the process, introduces confusion, and leaves many questions unanswered: 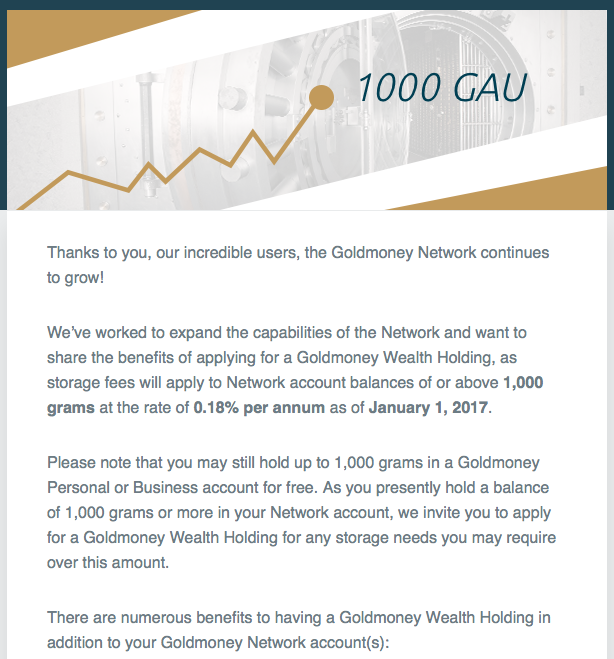 After leading with a positive-trending graphical chart and congratulatory message, the communication of the fundamental change in policy is delivered in this perfect example of corporate-speak:

We’ve worked to expand the capabilities of the Network and want to share the benefits of applying for a Goldmoney Wealth Holding, as storage fees will apply to Network account balances above 1,000 grams at a rate of 0.18% per year as of January 1.

Whatever this mess of a sentence is saying, here’s what it does not communicate:

To understand any of the above (except for the justification), you have to login to your Personal account, and try to make sense of all the error messages and alerts. Overall, this was a botched communication.

Here’s a quote from 37 Signal’s book, “Getting Real”, from the chapter entitled “Publicize your screwups”:

If something goes wrong, tell people. […] Be as open, honest, and transparent as possible. Don’t keep secrets or hide behind spin. An informed customer is your best customer. Plus, you’ll realize that most of your screwups aren’t even that bad in the minds of your customers. Customers are usually happy to give you a little bit of breathing room as long as they know you’re being honest with them.

Although the change at Goldmoney isn’t necessarily the result of a screwup, it’s a major event that completely changes the product experience for savers, involves an inconvenient transition, and potentially involves costs.

Goldmoney’s communication should have clearly addressed these things. When you break your promises to someone, you better explain why. But it didn’t. Instead, it spun the story as a positive event, downplayed how fundamental the change is, and left many questions unanswered. And the result of that approach is twofold:

The whole situation has left me with such a bad taste in my mouth that I’m quite likely to take my business elsewhere. I hope this story finds its way to those in charge at Goldmoney, and that the folks working in PR there learn the lesson that it’s OK to tell things as they are.

Update 1 of 2: A week after posting this article, I posted some follow-up thoughts including a Twitter conversation I had with Goldmoney’s founders.

Update 2 of 2: To clarify what I would have liked to have received, I’ve drafted an alternative version of the Goldmoney email.

As a Goldmoney customer with a Personal account balance above 1,000 grams, we need to communicate some changes that affect you. As background, we now offer three types of accounts—Personal, Business and Wealth. In broad strokes, our intent is that Personal accounts are not used for long-term savings, but rather for transactions, i.e. spending gold as currency. For savers and long-term gold investors, our intent is for you to use our Wealth accounts. To get from where we are today to that vision described above, some changes have to take place, and so here’s what you need to know and how you’ll be affected: - Previously, there was no limit on the amount of gold you could hold in a Personal account. We now limit Personal accounts to 1,000 grams.Since your account has more than 1,000 grams, we’re going to start charging a 0.18% annual storage fee on that portion of your balance above 1,000 grams. - Although you can leave your balance as is, we will not allow you to purchase more gold in your Personal account. To purchase additional gold, you will need to create a Wealth account. - A Wealth account is held with an affiliated, but different company, so you’ll need to go through KYC/AML procedures again. - You can link your accounts for the purpose of moving gold from Personal to Wealth. But only Toronto(Personal)-to-Toronto(Wealth) vault transfers are permitted, so if your Personal gold is held in another vault, you’ll first have to transfer it to Toronto, which will result in a 0.5% vault-to-vault transfer fee. - Wealth accounts have storage fees of between 0.12% and 0.18%, and purchase fees of 2.5% for purchases below $10,000. They do not have sell fees. - You can avoid those 2.5% buy fees, however, with a little trick—i.e. you can transfer enough gold from Personal to Wealth to free up some balance in Personal. Then, you can do your purchasing in Personal, and transfer the proceeds to Wealth at no cost. We know this is a bit inconvenient, and possibility confusing. We needed to make this change, however, to align our account types with our different lines of business strategy. If you have any questions about these changes, don’t hesitate to contact us.