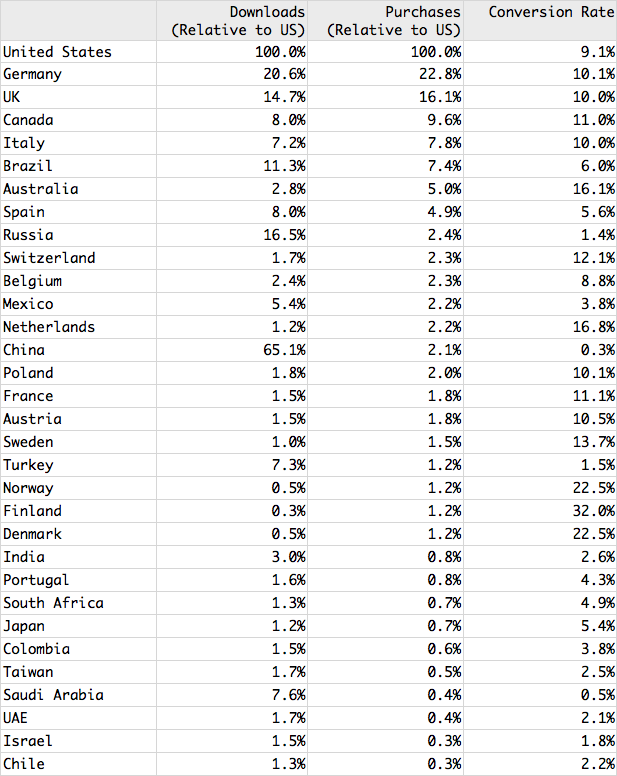 The Vuelta Cerdanya Ultrafons (or VCUF) is an endurance event organized each year by Eduard Jornet, father of the world’s greatest endurance athlete, Kilian Jornet. From the rustic town of Puigcerdá—nestled along the Spain/France border near Andorra—four trail running races take place over the course of a long weekend: a 14km race, a 35km race, an 87km ultra-race and the ultrafons itself, at a mind-boggling 214km!

END_OF_DOCUMENT_TOKEN_TO_BE_REPLACED

Yesterday we at Makalu launched our latest product — Rego, an iPhone app for bookmarking locations. It’s like Gowalla, but without the social part.

Turns out, Rego has an “special” meaning there, and Gizmodo Brazil covered the story in this hilarious article which got thousands of retweets and Facebook likes.

Here’s my version of the story:

As they say, “All press is good press”—so we’re looking on the bright side, or maybe better, where the sun don’t shine.

Update: After posting this video, I had an interview with Daniel Junqueira of Gizmodo, the author of the brilliant original post there. His colleagues then followed up with a second article on Gizmodo, about our interview.

Update 2: You know, our first thought about this was, “Oh what a disaster!” But at that point, there wasn’t much to do. And, to be honest, it’s pretty damn funny so we just rolled with it. Turns out the situation has been very positive — the meaning isn’t that strong, downloads in Brazil have gone through the roof! And since Rego is actually a pretty great app, the Brazilians are loving it (as is everybody who has downloaded it!)

My new book, Money for Something, has been out for about a month, and I wanted to post a note about my experience during that time.

The feedback so far has been overwhelmingly positive, and in that regard I’ve been thrilled by three things:

It’s a deeply gratifying feeling to have created something that will have a meaningful and positive impact in people’s lives. I’ve always been proud of our work, but I have to say this is a new, and special feeling.

Apart from the comments about the book itself, I’ve also received several compliments on the design of the book website, and the simplicity and efficiency of its checkout process and follow-on gifting workflows. For that, I owe all the credit to my incredible teammates Alex Bendiken and Justin Driscoll at Makalu Interactive

Positioning of the book

My objective for the positioning of this book was the following:

It’s a first introduction to investing.

While there are some great books out there about investing, a selection of which I recommend at the book website, I believe they are more appropriate as follow-on books to Money for Something; books to be read once the reader is convinced that they need to invest, and are going to invest.

In fact, I believe readers of those books, who have started with Money for Something, are more likely to actually finish reading them, and less likely to get side-tracked by some of the complexities.

So what are the goals of a first introduction? In writing this book, mine were:

In short, I want you to read the whole book, start investing, and stick with it!

The feedback I’ve gotten seems to confirmed these goals. Folks appreciate the “no fluff” concise writing style, and those who’ve written me seem very motivated to get started investing (and many report they have!)

By the way, regarding those interesting follow-on books, one was just released today. In my book, I discuss the long-term importance of the asset allocation and briefly mention the particular one I follow, called the Permanent Portfolio. Today, Craig Rowland’s anticipated new book, which goes into great depth about this particular allocation, has been released in Kindle format.

Several readers have contacted me with questions that, while outside the scope of the book, lead naturally from it. I’m currently considering how to address this follow-on interest and need — whether pointing people to the follow-on references, providing some opinion and help, starting a blog in which I write about some of the common questions, etc.

After a month, I’m absolutely convinced that Money for Something is uniquely positioned, broadly needed, and represents a tremendous value for its intended audience. That audience is itself very broad, and our challenge now is to reach it. For the moment, we’re relying on word-of-mouth — and let me extend a huge “Thank you!” to those of you who’ve beeen gracious enough to help! 🙂

So we’re searching for ideas about how to further and more broadly get the word out. If you have any, I’d love to hear from you. 🙂

Coming up next, I plan a series of articles about the process itself of creating and self-publishing an electronic book. It’s a topic of interest right now, and I hope to share the details of our experience.

IT’S NOT EVERY DAY that an opportunity presents itself to develop a product for an audience of 1.5 million people. That’s exactly what happened recently at Makalu, as we were engaged to develop the iPhone component of Catalog Choice’s new suite of premium services.

Within one year, the service signed up more than one million members.

Re-engaging with our friends 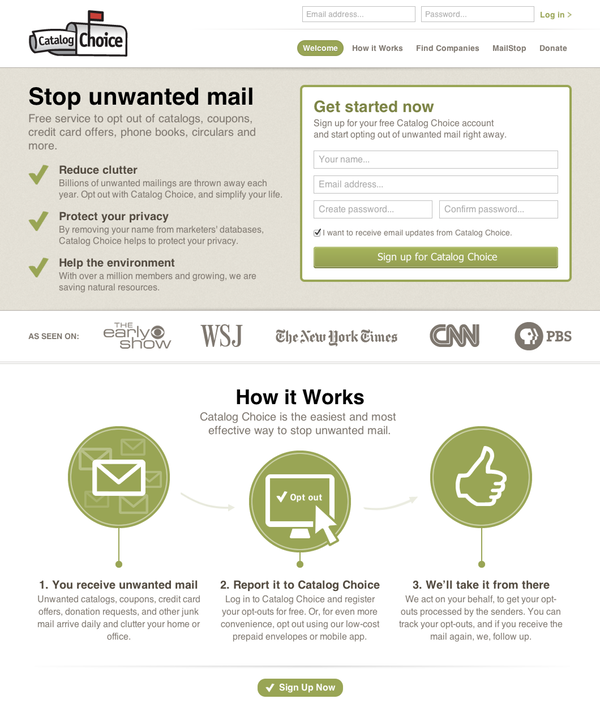 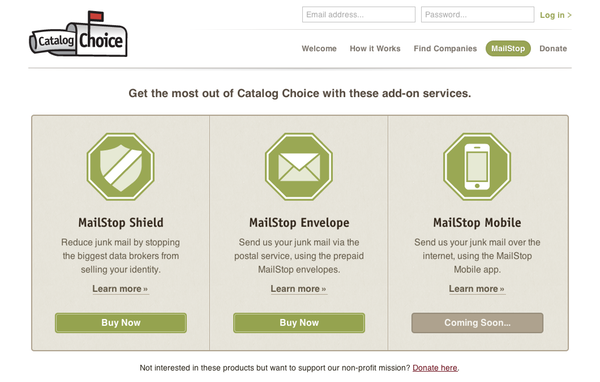 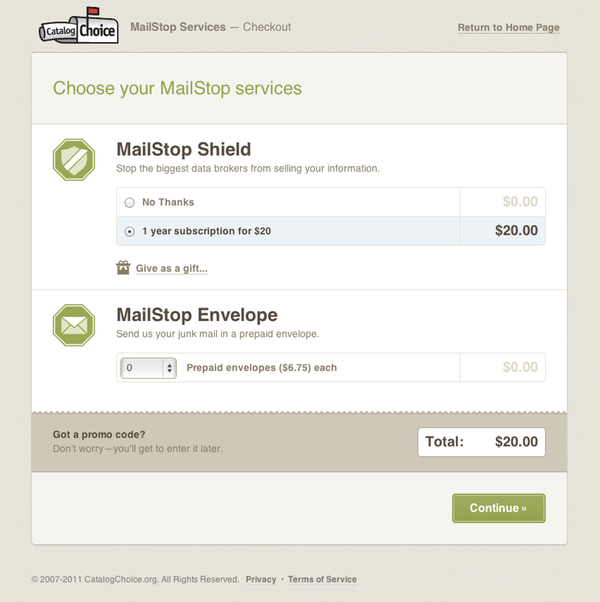 The results were good. We found that a reasonable level of discussion and review were, in fact, possible around just a set of mock-ups, as opposed to playing with a working prototype. On the other hand, it wasn’t perfect. Although it was possible to satisfy all the requirements and constraints in abstract design, once the product came to life in the form of a prototype, we realized that no matter how careful you are, you can never completely appreciate the subtle interactions and frictions that make themselves apparent when actually using a product.

For example, during the design process we iterated six times on the workflow in which a user captures “up to” three images to capture three critical pieces of information (the catalog name, mailing label, and merchant data.) How do you efficiently communicate to the user that they can take up to three images, but that one is often sufficient? Given that they are to capture three pieces of information, the risk is that they assume they must take three photos.

As you can see in our screenshots below, our solution feels more described than direct, and that’s an important disctinction. The designed solution works, but it’s not perfect. We’ll take the opportunity in version 2 to design something which feels more direct and intuitive, and better avoids the potential correlation in the user’s mind of the number of photos available, and the number of information pieces we need.

The design and development process, however, was definitely an improvement over the experience we had with RaceSplitter (in which we built prototypes too early). We’re pleased with the results, but we didn’t yet hit the sweet spot; and so there’s process improvements still to be discovered.

A visual tour of the app 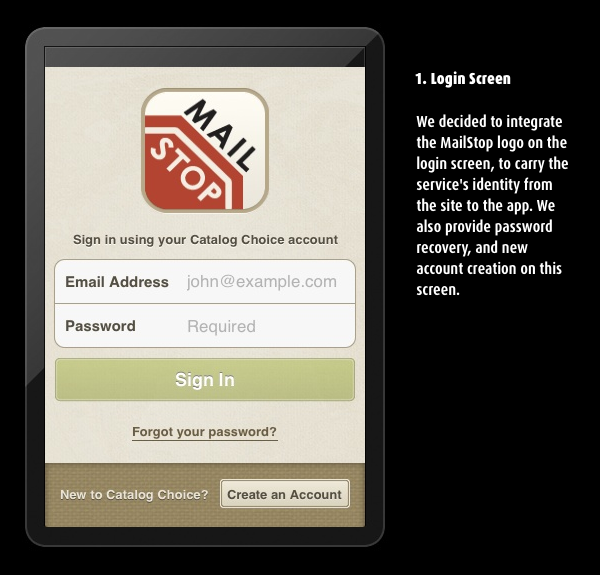 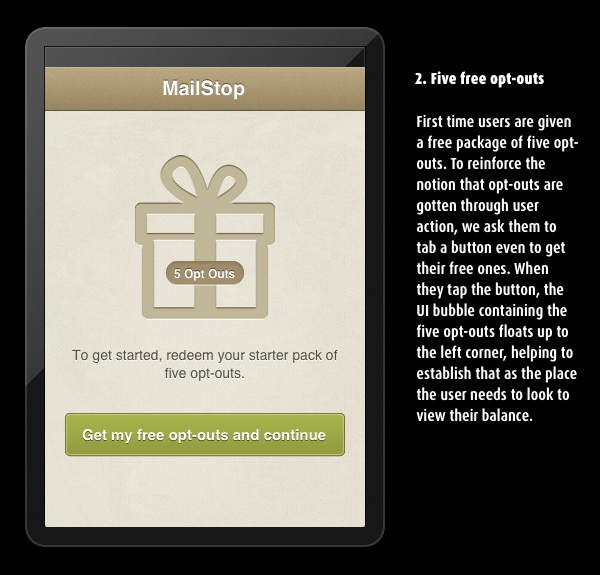 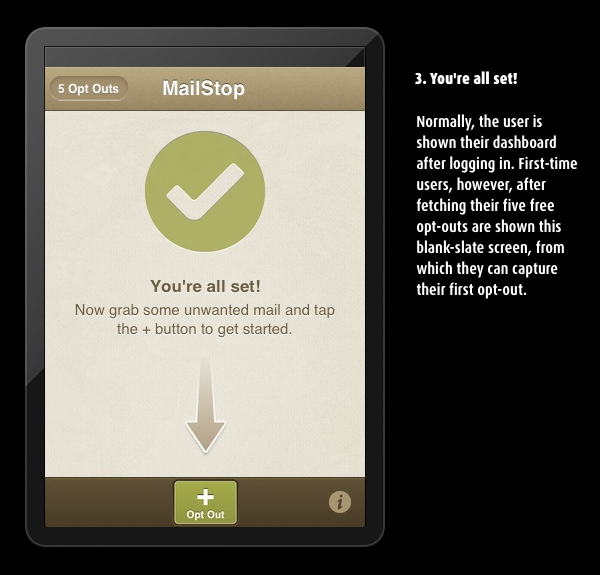 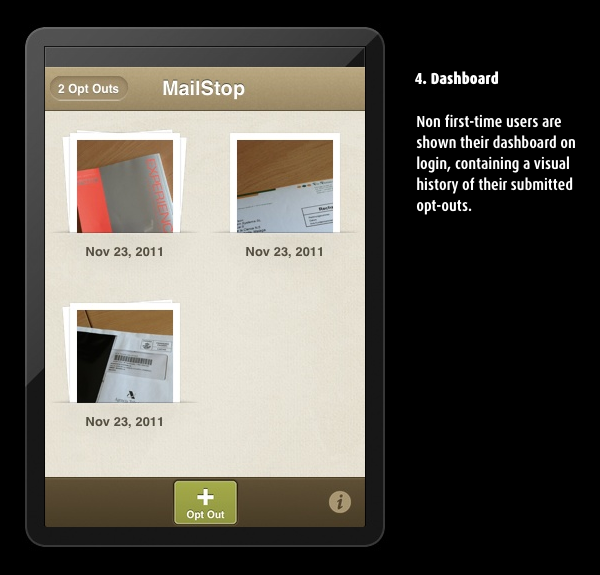 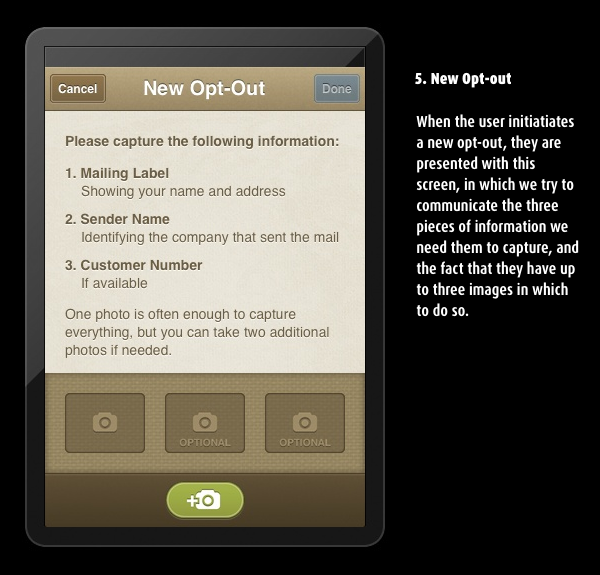 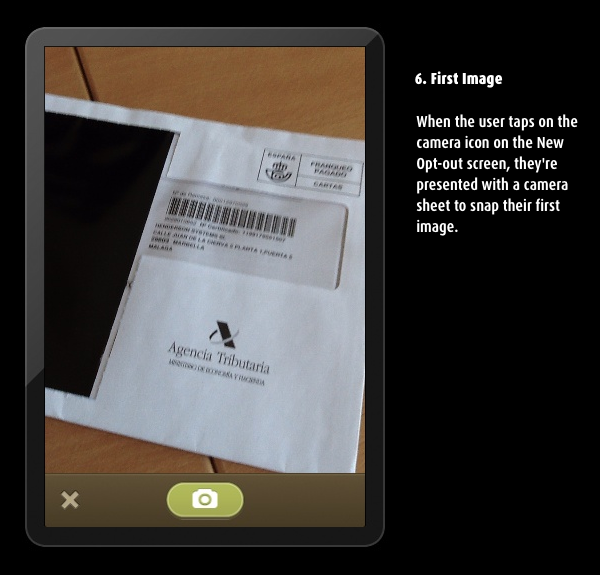 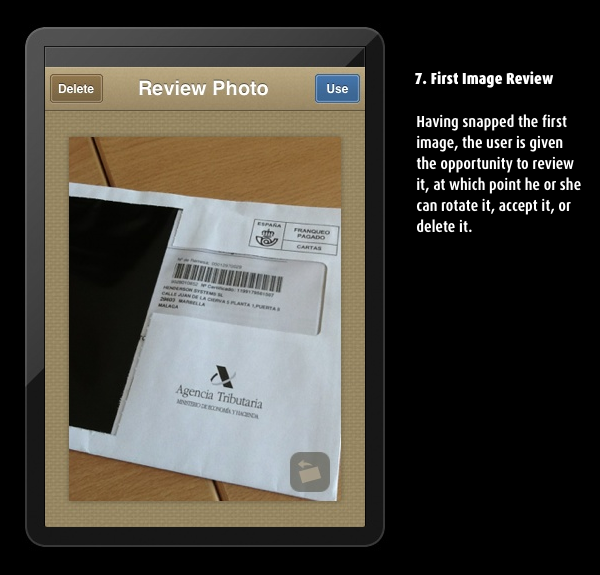 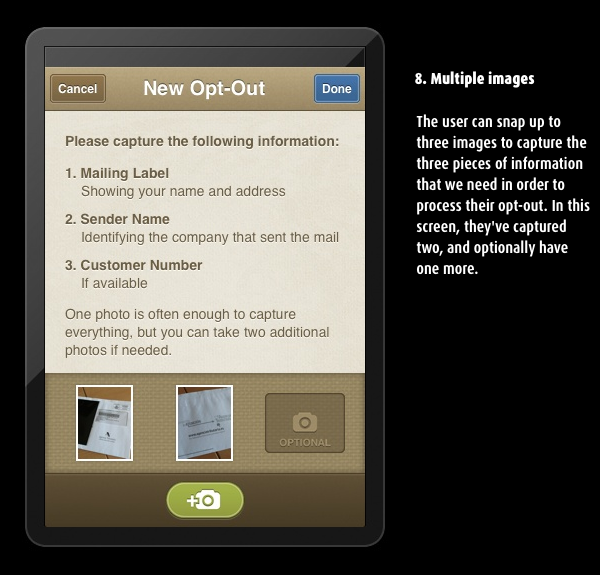 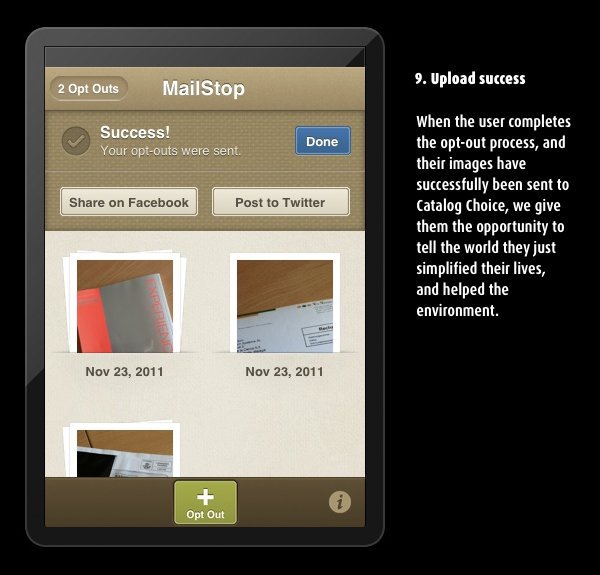 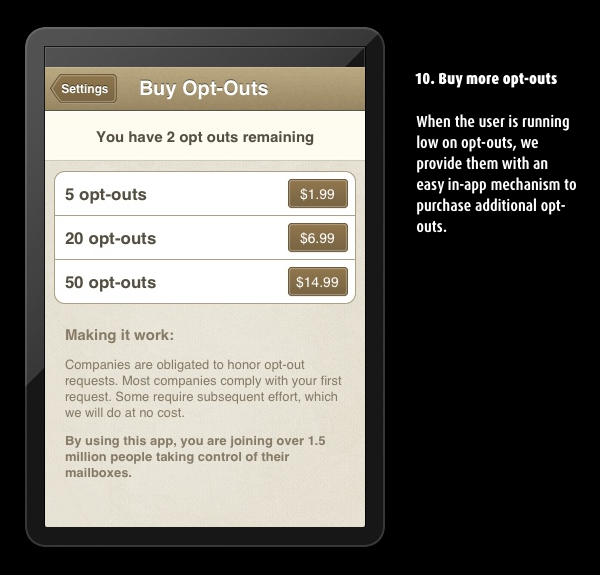 Look interesting? Why not give it a try right now? It’s free, and available today on the App Store!